Italy, oficially the Italian Republic is a unitary parliamentary republic in Southern Europe. To the north, Italy borders France, Switzerland, Austria, and Slovenia, and is roughly delimited by the Alpine watershed, enclosing the Po Valley and the Venetian Plain. To the south, it consists of the entirety of the Italian Peninsula and the two biggest Mediterranean islands of Sicily and Sardinia, in addition to many other smaller islands.

The sovereign states of San Marino and the Vatican City are enclaves within Italy, while Campione d’Italia is an Italian exclave in Switzerland. Italy covers an area of 301,338 km2 (116,347 sq mi) and has a largely temperate climate. With 61 million inhabitants, it is the 5th most populous country in Europe. Among the world’s most developed countries, Italy has the 4th-largest economy in the European Union, 3rd in the Eurozone and 8th in the world by GDP (IMF, 2014). 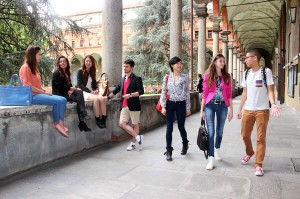 Italy’s capital and largest comune, Rome, has for centuries been the leading political and religious centre of Western civilisation, serving as the capital of both the Roman Empire and Christianity. During the Dark Ages, Italy endured cultural and social decline in the face of repeated invasions by Germanic tribes, Byzantines, Muslims and Normans, with Greco-Roman heritage being preserved largely by Christian monks. Beginning around the 11th century, various Italian cities, communes and maritime republics rose to great prosperity through shipping, commerce and banking (indeed, modern capitalism has its roots in Medieval Italy); concurrently, Italian culture flourished, especially during the Renaissance, which produced many notable scholars and artists like Leonardo da Vinci, Galileo, Michelangelo and Machiavelli. Meanwhile, Italian explorers such as Polo, Columbus, Vespucci, and Verrazzano discovered new routes to the Far East and the New World.

Italy was a founding member of NATO in 1949 and one of the Inner Six of the European Community in 1957, which became the EU in 1993. It is part of the Schengen Area, and has been a member of the Eurozone since 1999.

The climate in Italy

The climate varies considerably from the north to the south of Italy.
In the north of the country – the area between the Alps and the Tuscan-Emilian Apennines – the climate is harsh, with very cold winters and very hot, particularly humid summers. In central Italy the climate is milder, with a smaller difference in temperature between summer and winter and a shorter and less intense cold season than in the north; summers are longer, but the sultriness of the northern cities is mitigated by the sea. In southern Italy and the islands winters are never particularly harsh, and spring and autumn temperatures are similar to those reached in the summer in other areas of Italy.